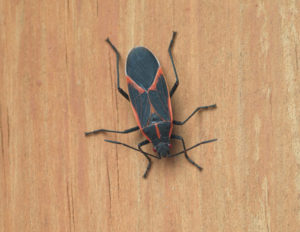 The common name reflects the fact that this species is a major pest of boxelder trees. Boxelder bugs are primarily a nuisance pest because they enter structures to overwinter. Adults about 1/2″ (1 1 – 1 4 mm) long; elongate-oval, somewhat flattened with head narrower than pronotum. Color black with reddish lines on dorsum, pronotum with margins and median line reddish, and basal half of wings with reddish margin. Nymphs similar to adults but lack wings although wingpads may be present, and bright red in color.

The overwintering adults emerge from hibernation and the females lay clusters of straw-yellow eggs on stones, leaves, grass, shrubs, and trees, especially in the bark crevices of boxelder trees. These eggs Turn red as the embryos develop and hatch in about 2 weeks. These nymphs feed on fallen boxelder seeds and later on new leaves, going through 5 instars. In the warmer regions of the United States, there are 2 generations per year.

The overwintering adults emerge from hibernation when the boxelder buds open and fly back to their host trees, typically in late April to early May. They first feed on the fallen boxelder seeds and later move to the female boxelder trees when the seeds begin to form, feeding on the newly developing leaves.

The primary host plant is the seed-bearing (female) boxelder tree, but they also occur on seed-bearing silver maple trees, Acer saccharinum Linnaeus. They do not feed on the male trees. Occasionally, they will feed on the fruits of plum and apple trees.

In the autumn, boxelder bugs become gregarious and congregate on the south side of rocks, trees, and buildings where the sun hits. After large masses congregate, they may fly to nearby buildings to hibernate for the winter.

Inside, boxelder bugs are primarily a nuisance pest. However, their fecal material may cause a red stain, resulting in discoloration on-curtains, drapes, clothing, and other resting places. When crushed or handled roughly, they produce a strong, disagreeable odor. They occasionally “bite” people, causing a skin irritation and producing a red spot similar to a small ulcer.

No attempt should be made to kill these bugs in wall voids at any time because dead insect bodies attract dermestid beetles (larder beetles, carpet beetles, etc.). Dermestid larvae wander and readily enter the living space, causing numerous complaints. Instead, wait until summer when all five overwintering adults are out of the wall voids.

Control begins outside. Reducing the outdoor population of boxelder bugs is highly recommended. Reduction is achieved by spraying infested trees with the application timed to kill the young 1st generation nymphs and then again for those of each succeeding generation.

Temporary but immediate indoor relief can be achieved by removal with a vacuum. Then to prevent the entry of more adults, seal the possible routes of entry. Use paintable silicone caulk and/or expandable foam to seal. Such routes include around window pulleys (seal with tape or steel wool), window frames, door frames, baseboards, etc. For electrical outlets and switch boxes and heating duct and return-air vents, remove the cover-plate, seal, and replace. For light fixtures and ceiling fans, remove the fixture to its base plate, seal, and replace.